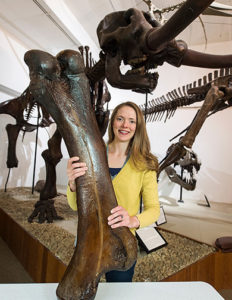 Carrie Eaton tells her friends she’s sort of like a librarian — except each book weighs between four and 400 pounds. As curator of collections at the UW–Madison’s Geology Museum, she wears many hats, one of them being overseeing the 120,000 objects in the museum’s collection.

But her role as curator doesn’t stop there. Among other responsibilities, she works with internal and external researchers who want to study those objects, develops new exhibits, trains students, designs outreach programs, and also does some of her own academic research.

“No day is the same,” says Eaton, who received a master’s degree in geology from UW–Madison in 2004. “I can’t say that enough. I served as a project assistant here when I was getting my master’s so when this job opened I knew I had to apply because I wanted that job more than anything. And I lucked out and was hired in 2009.”

Eaton says she uses her background in geology, coupled with her love of outreach, on a daily basis. The museum brings in 14,000 school children every year and she also manages a summer program that travels to Dane County libraries to teach people about the ice age.

“What is beneficial about Madison is in addition to getting your graduate degree, you also learn how to talk about your research. That’s a really big part of it, being able to communicate what you do. I have been able to pull together all of these things I do and apply them to this job.”

Her research on the museum’s mastodon fossil highlights her multifaceted role. For the fossil’s 100th year on display, she began digging around in the museum’s archives. There she stumbled upon information that suggested the current display is actually made of bones from two different mastodons found in Wisconsin in the late 1890s.

Eaton also encourages students interested in positions that mix science and outreach to get as much practical experience as possible. It’s important to stay flexible, she says, and maybe take an extra volunteer, directed study, or public speaking opportunity if it presents itself.

“I do feel a little bit like I get to steer my own ship, and that we’re the very epitome of the Wisconsin Idea,” she says. “We like people to come here and learn something about the natural history of this state. As curator I feel my number one job is to serve those visitors, whether they are researchers, the public, or school children.