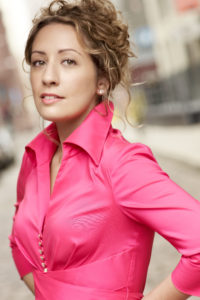 Soprano Jamie-Rose Guarrine calls opera an “Olympic event.” Each performance is a physical feat, the extension of an unamplified voice into every corner of a concert hall for as many as three hours on end. Guarrine – who boasts appearances with the Madison, Santa Fe, and San Francisco Operas among others – attributes her success as a singer to a graduate experience that prepared her for this endurance challenge. Voice maturation within the opera world is a “long trajectory,” she explains. Over the course of that trajectory, UW–Madison’s School of Music provided “a safe place to develop my art form.”

Key to that development was UW–Madison mentor Jim Doing. Like Olympic athletes, opera singers are not born but made with the support of committed trainers. As a judge at a college-level music competition, Doing first described her voice as “tired and worn.” But he pushed her chords to new places within one hour-long lesson in the fall of 2000. Awed by her immediate progress, Guarrine enrolled in the Master of Music program at UW–Madison.

From the start, Guarrine honed her craft through constant practice. Her graduate program’s small size provided ample opportunity to perform where she might have “gotten lost in the shuffle” elsewhere. Her very first semester, she landed two major roles at Music Hall. There, she worked with University Opera Director Bill Farlow, who shaped her approach to stagecraft. While balancing performance and coursework, Guarrine also auditioned for prestigious national programs like the American Young Artists Program and the Metropolitan Opera National Council Auditions.

Over time, patience proved equally as important as practice. The life of an aspiring opera singer is sometimes a string of disappointments. As a student, Guarrine vied for coveted roles and apprenticeships against hundreds of sopranos. The odds were stacked against her – and even contemplating the odds seemed to stifle her audition performances. But Doing reassured her, “The cream, however slowly, will rise to the top.” He and other mentors convinced Guarrine to “stay the course and keep going.” After earning her master’s degree in 2002, she elected to pursue a Doctorate in Musical Arts. The decision was hardly conventional. Most members of her cohort had opted to leave school and perform full-time. But Guarrine hoped to perfect her craft, and financial support – in the form of a Paul Collins Distinguished Wisconsin Fellowship – made the decision a no-brainer.

Her persistence paid off. Over time, Guarrine approached auditions differently, focusing on the performance itself rather than its outcome. Roles materialized from that mindset, including one at the Florentine Opera in Milwaukee (to which she returned this past May). In 2005, she not only earned her DMA, but also took first place at the Metropolitan Opera National Council Auditions and secured an apprenticeship through the American Young Artists Program. On the heels of that apprenticeship followed regular appearances across the country with the Minnesota Opera, Santa Fe Opera, Anchorage Opera, and more. By her own admission, those successes stemmed directly from her graduate experience: “I really honed my craft, and learned how to walk in the door and win the audition.”

Eventually, the DMA not only enhanced her performance skills, but her professional credentials as well. After nearly a decade of a “suitcase existence,” Guarrine sought the stability of a faculty position. (She jokes that after fourteen years of marriage, she and her husband, cellist Karl Knapp, still had not lived together full-time.) After a while, she explains, “You start to look for a life blend.” In 2015, she joined the faculty of U-Mass Amherst as an assistant professor, building on her graduate experience in vocal instruction. Like UW–Madison, U-Mass Amherst encourages faculty to remain active in their field, a mentality that gave Guarrine the go-ahead to pursue roles like Adele in Florentine Opera’s Die Fledermaus.

Back at UW–Madison for the Summer Music Clinic, Guarrine beams broadly while describing her life’s work. She finds fulfillment in both performance and instruction, a balance her graduate experience helped strike. Reflecting on her career so far, she concludes:

“You can have stability, as well as the artistry that feeds your soul. When I step out on the opera stage, I think, I was born to do this.”