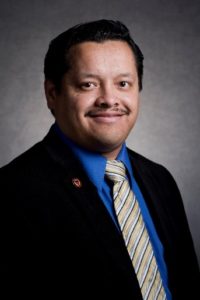 For UW–Madison alumnus Gerardo Mancilla, PhD, scholarly pursuits, cultural identity, and community involvement are deeply interconnected, and have shaped his path to becoming Edgewood College’s new Director of Education Administration and Leadership. In his current work, Mancilla desires to find ways to promote social justice, address inequities, and think critically about issues affecting the field of education. Having received his PhD in curriculum and instruction in 2015, Mancilla’s dissertation research focused on Latino youth and the school-to-prison pipeline, which refers to policies created by educational institutions (e.g. use of police in schools) that place students at higher risk of entry into the justice system.

Specifically, he examined one particular court diversion program working with Latino youth who had received a municipal citation. He desired to find out how this program diverted Latino youth from entry into the juvenile justice system.

This type of work is important because it considers how certain policies in schools are criminalizing youth and [considers] what policies can be implemented to help Latino students succeed.

His doctoral work was influenced by several experiences during his time enrolled at UW–Madison’s graduate school.

Prior to pursuing his PhD, Mancilla received his B.S. in elementary education (2007), as well as M.S. in counseling psychology (2010) and a M.S. in curriculum and instruction (2010)—all from UW–Madison. Before working on these advanced degrees, he encountered important mentors that shaped his career trajectory. “After my undergrad, Professor Alberta Gloria in counseling psychology approached me about graduate school. She was teaching a course called Chicano Psychology and that course captured my interest in learning about Latino issues in psychology and how different groups generate knowledge.” Mancilla added that supportive mentors also helped Mancilla reflect on how his Mexican identity influenced the work he did as a student. He explained that, “One instrumental person in helping me understand my place at the university was Ruttanatip ‘Dang’ Chonwerawong, former Assistant Dean for the School of Education, who mentored me as an undergrad and who I worked under as a graduate student, while working in the Student Diversity Programs in the School of Education.” Mancilla also credits the completion of his PhD to professors Michael Thomas and Erica Halverson.

Mancilla has made an impression outside of the UW–Madison community as well. He worked as dual language immersion teacher at Cherokee Heights Middle School in Madison for four years and has also served on a number of community organizations including the Latino Education Council and the Vera Court Neighborhood Center Board of Directors.

In his new faculty position at Edgewood, Mancilla will be working with experienced teachers who are pursuing a graduate degree in education administration. Similar to his past research interests, he intends to focus on social justice, culturally relevant pedagogy, and leadership. Despite moving on from the UW–Madison community, Mancilla will continue to be an agent for change in the city of Madison and beyond.