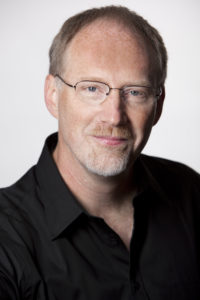 As a college senior, Mark Stanley possessed a clear sense of purpose. On his résumé, he wrote that his “career objective” was to become a lighting designer for a major dance company. True to his word, Stanley has worked as Resident Lighting Designer for the New York City Ballet for the past thirty years.  In that time, he has also collaborated with companies across the globe, from the Alvin Ailey Dance Theater to the Paris Opera Ballet. But his career is as remarkable for its fluidity as for its firm adherence to a long-held goal. Since earning his MFA from UW–Madison in 1986, Stanley has regularly crossed boundaries between theory and practice, classroom and community, and academic and professional worlds.

Arriving in Madison in 1979, Stanley met a mentor who exemplified the fluidity that now characterizes his own career. Professor Gilbert Hemsley loomed large in both the performance world and the lives of his students.  As Stanley puts it, Hemsley taught by experience, drawing no distinction between the classroom and the community beyond it.  That approach translated to some “outrageous assignments.” In one instance, Hemsley instructed Stanley to “go stand by Lake Mendota and count 60 different blues.” It also meant full immersion into the production world.  “He took us everywhere he went,” Stanley recalls, enlisting students to light the Broom Street Theater, the Madison Repertory Theatre, and even the Governor’s inauguration party. That hands-on experience extended even beyond the bounds of the state; Stanley fondly describes “loading up a van” to light a performance in Boston, where he and other graduate students slept on the floor of a hotel room.

As a result, no fine line separated Stanley’s coursework from the start of his career. Before even completing his MFA thesis, he joined his mentor at the New York City Opera in 1981. Just two years later, Hemsley’s death to cancer dealt a major blow to Stanley and other devoted students. Together, they commemorated his life with an internship program (The Gilbert Hemsley Lighting Program) to assist young designers in transitioning from the academic to the professional world. In their own lives, Hemsley had made that transition seamless.

For Stanley, academic and professional worlds continue to intersect. After nearly two decades at the New York City Ballet, he assumed a new role as professor in the Lighting Design Program at Boston University in 2004. As he explains it, teaching injected “new energy” into his professional work and kept him up-to-date on new lighting technologies. “You develop habits and methods,” he comments, “and rethinking the why of why you’re doing these things is a good thing.” Conversely, his professional work informs his approach to teaching. Taking cues from his mentor at UW–Madison, Stanley aims to parallel class time with hands-on experience to acclimate students to “both worlds.” He regularly guides about 15 undergraduate and 6 graduate students as they navigate the production process of a show from start to finish.

Asked to pick a favorite performance, Stanley declines to name just one. The joy of his work, he explains, is the opportunity to collaborate across disciplines with a diverse range of people, including dancers, choreographers, musicians, fashion designers, and even street artists. As an example, he cites his work alongside Paul McCartney on Ocean’s Kingdom at New York City Ballet (2011). Here, perhaps, Hemsley’s directive to “count 60 different blues” by Lake Mendota may have born fruit. Upon a recent visit to campus, he again gazed on the lake – this time with friends at Memorial Union Terrace: “It was an idyllic time,” he concluded, wondering aloud, “if Madison were two hours closer to New York…”