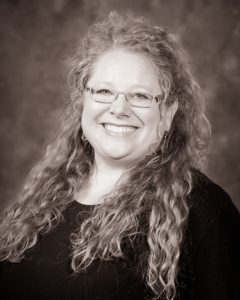 Heather Pickering owes her debut role and her guiding approach to theater to two women: her mother and public school teacher Karen Christopherson. Pickering’s mother encouraged her daughter’s interest in acting by signing her up for Christopherson’s theater group.  Christopherson had launched the free children’s theater because she was adamant that the arts be accessible to more than a privileged faction. She cast Pickering in a contemporary staging of Romeo and Juliet. However silly that production seems in hindsight, Pickering took Christopherson’s insistence on inclusivity seriously. As she explains, “Theater should tell the story of everybody, not just a select few.” Pickering has put that principle into practice since graduating with her MFA in Theatre and Drama at UW–Madison with an emphasis on Acting/Directing in May 2016.  With her production company in Rapid City, South Dakota, she directs all-abilities performances and at this writing, was gearing up for the October 7 première of “ABLE: The Disability Chronicles.”

Before coming to Madison, Pickering directed a broad range of non-professional players in high school, community, and children’s theater. In those settings, she valued performances for their capacity to include and transform diverse actors and audiences. A production of The Laramie Project staged within a South Dakota community in 2008 stands out in those respects.

“That production opened a dialogue in the community. It brought together the cast members in a connection that wouldn’t necessarily have been created in a ‘real-life’ setting.”

That connection even extended to people who had initially protested the play, but changed their minds after watching it.

After years of hands-on experience, Pickering decided to hone her craft by pursuing her MFA. At UW–Madison, professors like Norma Saldivar helped her to “unlock” complicated texts, especially fundamental works by William Shakespeare and Samuel Beckett. Her graduate experience also equipped her with a “toolkit of communication skills” to reach actors and help them to deliver more nuanced performances.  As crucial as those lessons were her experiences teaching “Introduction to Acting,” a course open to theater majors and non-majors alike.  In that class, Pickering says, she strove to endow students with “the ability to notice the world around them and contribute in a positive way.”  Her success showed when science and pre-med students later reported, “By taking this class I really started looking at my relationships differently.” Those compliments confirmed her position that theater education should not aim solely to identify “the next greater actor,” but to provide opportunities for all people to “open up as human beings.”

Pickering has made that message her modus operandi since graduating in May. She devotes herself full-time to Flutter Productions, an all-abilities company founded in 2008 as part of the Black Hills Community Theatre in Rapid City, South Dakota. This summer, she collaborated with fellow UW–Madison alum Andrew Grace on “OSITY: An adventure through a cabinet of curiosities.” The piece explored two characters coping with social exclusion, and included over 50 cast members of wide-ranging ages and abilities. Their current collaboration, “ABLE: The Disability Chronicles,” is a series of vignettes written and performed by individuals with disabilities, who comprise the majority of the cast. This work and others, Pickering comments “possess a level of authenticity not present in a traditional theatrical performance.”

Reflecting on her recent graduate experience, Pickering concludes that it prepared her and her peers to become “self-starting artists.”  Where opportunities to act and direct do not present themselves, “you have to be willing to make your own opportunities.” For Pickering, making her own opportunities means doing so for others. True to her mother’s mission, she aims to convince individuals and communities alike that everyone is capable and welcome of participating in the arts: “Sometimes people just need an opportunity or a chance.”

Correction: An earlier version of this interview did not credit Karen Christopherson as the founder of the children’s theater group and the person responsible for casting Pickering in her first acting role.