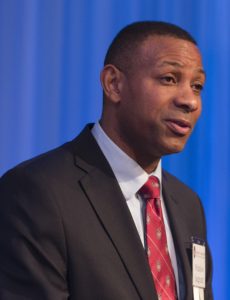 Graduating from UW–Madison in 1995 with a PhD in electrical engineering, Winslow Sargeant is motivated by a passion for solving problems. This passion led him to establishing a career reaching across the fields of electronics engineering, business administration, government, and academia. Currently, he works as the Managing Director of S&T LLC, a firm in Great Falls, Virginia, supporting investment and business development for early-stage growth companies that specialize in cybersecurity, energy, communications, capital formation, and education. In this position, he tracks the portfolios of small and medium-sized companies and seeks out access to capital for these companies. Despite completing his degree two decades ago, Dr.  Sargeant still continues his involvement in the UW–Madison community as a member of the Board of Trustees at the Wisconsin Alumni Research Foundation (WARF).

Sargeant began his diversified career trajectory in 1992. While completing his dissertation, he left campus and worked for three years at IBM. “I wanted to do something practical and that was tied to industry. I had an urge to do something that involved applied research, and to me that meant being involved in actually putting products out into the market,” he explained. During his time at IBM and as part of his dissertation research, Sargeant worked on fiber optics and optical detectors, which were successful in the market place.

After completing his dissertation, Sargeant started working at AT&T Bell Laboratories (now Nokia Bell Labs) in Allentown, Pennsylvania. “AT&T Bell Labs was an opportunity for me to work alongside some of the best scientists in the world.” While in Allentown, he transitioned into circuit chip design, which allowed him to expand his passion for solving complex problems. In 1997, he pursued his entrepreneurial and business interests by cofounding AANetcom, a company that designed computer circuit technology for telecom and broadband applications. In 2000, AANetcom was acquired by PMC-Sierra, a publicly traded company.

Between 2001 and 2005, Sargeant took his talents to the National Science Foundation, acting as the program manager for the Small Business Innovations Research Program. This experience prepared him for later his work as Chief Counsel for Advocacy at the Small Business Administration (SBA). Nominated to this position by President Obama in 2010, Sargeant describes this as “the biggest job I’ve ever had in terms of its reach.” In his appointment that lasted until 2015, he reported directly to the White House and represented small businesses on all matters that related to rules and regulations, access to capital, and research.

“My role involved advocating for all 28 million small businesses in the country. I was tasked with making sure that their (small business’) voices were heard before Congress, the courts, and federal and state agencies.”

Thinking back to his time as a PhD student, Dr. Sargeant credits his success to his advisors and other graduate student groups on campus. “I had two great advisors—Dr. Bahaa E.A. Saleh and Dr. Denice Denton—who kept me engaged and focused. And I also benefitted from working with the Wisconsin Black Engineering Students.” He believes the support he received during his graduate studies, and the networking opportunities since leaving Madison, have been instrumental in pursuing his passions. Reflecting on what it means to be a Badger, Sargeant noted that, “There is something about UW–Madison that is special. The community has shaped my life and my family’s life for the better.”