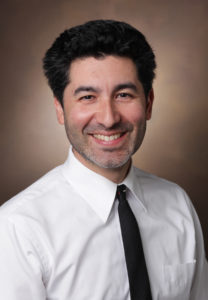 Graduating with a doctorate in astronomy from UW–Madison in 2000, Keivan Stassun has built a career dedicated to advancing our understanding of the cosmos through research, teaching, and outreach. Working as a full professor of astronomy at Vanderbilt University and as an adjunct instructor at Fisk University, a historically black university in Nashville, Tennessee, Stassun’s passion for the field began during his undergraduate years at the University of California–Berkley (A.B., 1994).

His current research focuses on the processes that lead to the birth and evolution of stars, like our sun, in different planetary systems. Working with a team of faculty and graduate students as part of the Vanderbilt Initiative in Data-Intensive Astrophysics (VIDA), Stassun has examined sun-like stars, their chemical composition, and their ingestion of ‘terrestrial planets,’ as these stars develop. His team recently developed a new modeling technique that might help researchers identify Earth-like exoplanets. The model allows researchers to better understand how a star’s composition is affected by the planets it ‘eats’ as it develops. A long-term goal of this research is to help scientists identify more Earth-like planets. Similarly, Stassun is a project leader for KELT (Kilodegree Extremely Little Telescope), which aims to detect transiting planets around bright stars. The KELT researchers identify these planets when they pass between us and the target star, and subsequently cause the target star to dim. Though the robotic telescope is stationed in South Africa, the data is stored and analyzed at Vanderbilt. Stassun’s team has also discovered a method to use the “hissing” of stars to accurately measure their properties. Most recently, Stassun was selected as a co-Investigator on the NASA TESS mission to find Earth-like planets around nearby stars. That mission will launch in early 2018.

While a graduate student at UW–Madison, Stassun worked under the direction of Bob Mathieu, who helped him cultivate his scholarly identity.

“As a scholar, I wanted to not only enjoy my research, but also impact others’ lives with that work.”

During his time on campus, he became passionate about public outreach and minority representation in the sciences.  Starting in 1998, Stassun developed an astronomy outreach program called Scopes for Schools, which is a low-cost, field tested model for astronomers to conduct outreach aimed at minority and other underserved students, with an emphasis on curriculum development and on professional development for teachers. Stassun’s own personal identity as someone of Mexican and Iranian descent informed this passion for developing Scopes for Schools. He continues to serve as the director of Scopes for Schools, and was past director of the Fisk-Vanderbilt Masters-PhD Bridge, which “exists to improve the demographic representation in the Science, Technology, Engineering, and Mathematics (STEM) fields.” That program has become the nation’s leading producer of underrepresented minorities earning PhD degrees in astronomy, physics, and materials science.

Stassun’s outreach extends beyond younger generations. He recently developed an online course called “The Life and Death of Stars,” for The Great Courses—a series of college-level audio and video courses produced by The Teaching Company (TTC). The courses are not graded, and are meant for enrichment. “I was contacted by the people at TTC and was excited to do something like this because it offers folks, who may be senior or retired and who might have some free time, to explore new and old interests,” Stassun explained. “To be able to help someone rediscover their passions for learning about the universe was very appealing and rewarding for me.”

Going forward, Stassun wants to continue doing the work he loves. Even though he has left Wisconsin, he still makes a place for it in his life. “In Nashville, I’m still cheering the Badgers and Packers on almost every Saturday and Sunday, at home or at a pub.”