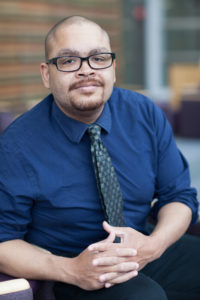 The Nashville, Tennessee native had a long and impressive journey to his time at the university. Growing up he lived in Alaska, West Germany and everywhere in between. His father was a military officer so his family moved around quite a bit.

Wright attended Duke University as an undergraduate, earning degrees in history and economics. Wanting more, he went on to complete his Masters of Engineering Management as a Blue Devil, before attending Washington University in St. Louis for law school.

Upon earning JD, Wright spent a year clerking for the Honorable Lavenski Smith of the United States’ Eighth Circuit. He then spent five years working for the United States Department of Justice (DOJ) doing voting and election law with a focus on race-based claims, and claims on behalf of service members.

After an exhausting five years with the DOJ, Wright was ready for a new challenge. An opportunity that he found with UW–Madison’s MFA program.

“When this opportunity came up it sort of seemed like providence,” Wright said. “Here’s an opportunity to do something really, really cool, at a great university like the University of Wisconsin, and at the same time I don’t have to travel around the country doing political law.”

Wright went on to explain that his time in the MFA program was invaluable because of the mentors he had. He believes that their commitment to the program and its students played an influential part in helping him to develop a skill-set that is applicable to all parts of his life.

“An MFA, as the name suggests, is an art. You can only learn so much about a craft by reading books and staying in class,” Wright said.

“In all art programs you need a mentor, you need someone to show you individualized attention to teach you how things are done. And that’s one of the advantages of this program.”

Upon completion of his master’s degree in 2014, Wright became a clinical assistant professor at the University of Wisconsin Law School. In this role, he supervises the Wisconsin Innocence Project (WIP), a program focused on exonerating individuals who were wrongly convicted of serious crimes.

Since its founding, the WIP has successfully freed 20 wrongfully convicted individuals, and has taken on cases both in Wisconsin and around the country. Wright believes that the skills he learned while pursuing his MFA have become a critical part to carrying out the program’s missions.

“One of the thing that I emphasize in the [Wisconsin] Innocence Project is writing,” he said. “You need to start developing a narrative. People want to know the story of how an innocent man go to jail. I use a lot of the narrative design skills that you learn in the MFA program here.”

Wright considers himself fortunate to be pursuing “basically two parallel careers.” When he is not working on Bascom Hill, Wright dedicates himself to his writing. He is currently working on a novel, and writes essays for The New York Review of Books on a regular basis.

“I’m happy here at the University of Wisconsin,” he said. “It’s really the balance that I’ve searched for, for a very long time.”