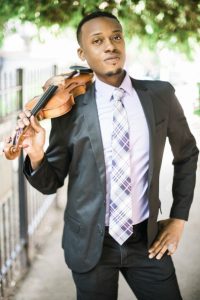 Teddy Wiggins is a University of Wisconsin–Madison graduate from the School of Music, in violin performance. He is currently a co-concertmaster/principal violinist with the Civic Orchestra of Chicago, a training orchestra that develops musicianship and prepares musicians for professional careers.

Through Civic, he performs at free events around Chicago, but independently performs for private venues and seized an opportunity to perform in a live WTTW-PBS concert featuring singer-songwriter Regina Spektor last fall.

Wiggins grew up in St. Louis, Missouri, and was largely influenced by his musical family and community. As a young musician, Wiggins was passionate, especially in classical music, but his school did not provide the environment he needed to grow as a musician. After his first concert, Teddy’s potential was noticed and he was redirected to violin specialists eventually meeting Winifred Crock, a Suzuki-trained violinist, which began his relationship with music in earnest. “Focus, discipline and direction … he really had specific goals he wanted to accomplish and as a thirteen/fourteen year old, he had absolute dedication,” says Crock.

While at Walnut Hill, Wiggins had opportunities to travel abroad to Europe and Asia for several performances. Meanwhile, lessons at the New England Conservatory in Boston, Massachusetts led him to The Royal Conservatory in Toronto, Ontario, Canada, where he would earn a bachelor’s degree in Music-Performance. While at The Royal Conservatory, his opportunities abroad expanded. He auditioned for a position in a highly competitive music festival in Switzerland, which he won in three consecutive summers. Between performances and academics, Wiggins also co-founded The Annex Quartet, which ultimately led him to perform at Carnegie Hall alongside The Kronos Quartet, who are well known for their experimentation with string quartets and electronics.

There is no doubt that Wiggin’s success was the result of perseverance and dedication, but by the end of his senior year, he was ready to decelerate. He realized that his fast-paced lifestyle was not sustainable and needed to take a step back to improve his craft. Aided in the decision by instructors and professionals, Wiggins decided to go to graduate school and leave The Annex Quartet. “I wanted to learn more … because chamber music is my passion,” says Wiggins. “It was difficult to leave after four years together, it became part of my life.”

Through Paul Kantor’s guidance, Wiggins chose to attend UW–Madison under the mentorship of Felicia Moye. Relocating to the Midwest alleviated some of the pressures of competition and performance in a large city.

“I feel that being at UW, the program taught me a lot but gave me a lot of freedom to hone in on my skills, and to figure out more of what I wanted to do — experiment with certain things.”

As he ends his fellowship with Civic, Wiggins will be moving once again to be part of the prestigious Miami New World Symphony in the fall. As he navigates his passion in new directions, he remembers what Felicia Moye once said to him, “You have to love your sound. Techniques serves the music and not the music the technique.”