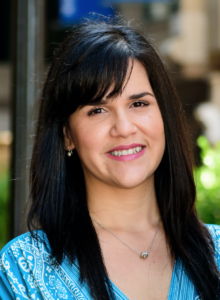 Zulmarie Perez-Horta completed her doctoral program in Cellular and Molecular Pathology from UW–Madison in 2016 and began a Science & Technology Policy Fellowship (STPF) with the American Association for the Advancement of Science (AAAS) in Washington D.C. in fall of 2017. Perez-Horta was one of 170 fellows selected and will gain policymaking skills while applying her scientific background to make contributions to the policy and decision-making process.

Originally from Puerto Rico, Perez-Horta received her undergraduate degree from Universidad de Puerto Rico, leaving soon after to pursue a doctorate degree at UW–Madison. Midway through her program, she realized her professorship training benefitted her academic interests but was not fully facilitating her professional development. She attended campus lectures and workshops that addressed her concerns and furthered her interests. Jo Handelsman, current Director of the Wisconsin Institutes for Discovery at UW–Madison, gave a guest lecture in 2014, which inspired Perez-Horta’s passion for community outreach and public service.

“She (Handelsman) listed all the initiatives she wanted to accomplish as a scientist in the government and I was blown away by that, because she was talking about how she wanted to improve STEM education, increase participation of women in science, improve retainment of minorities in science.” Handelsman’s lecture made Perez-Horta realize her own potential for influencing and outreach at the national level and was introduced to the term “science policy.”

Additional opportunities followed, including the Catalyzing Advocacy in Science and Engineering (CASE) workshop in Washington D.C. She attended three days of intense training, detailing the various stages of policy-making. Sessions included opportunities to speak with state representatives and an introduction to AAAS STPF. The workshop allowed Perez-Horta to integrate her knowledge in science with her passion for outreach.

“It was an enriching experience, completely different from what I had ever been exposed to,” says Perez-Horta. She returned to campus with an idea to connect like-minded graduate students by starting a student organization focused on science policy advocacy, known as Catalysts for Science Policy or CaSP.

CaSP is something I am most proud of … It feels great to start something and see it improve over time. Hopefully by contributing to this organization, more graduate students can be exposed to science policy not just as a career but also as a scientist.

Perez-Horta continued her doctoral research in cancer immunotherapies while expanding her skills outside the lab by co-chairing a science outreach committee and cultivating the early stages of CaSP. Alissa Ewer, Assistant Dean for Office of Professional Development and Communications in the Graduate School had this to say about Perez-Horta: “She’s incredibly driven. It took a lot of initiative to create a student organization from scratch and to see its still around 4 years later.”

After her dissertation defense, Perez-Horta applied for the AAAS fellowship, highlighting her experiences with CaSP, which helped advance her through the interview process. She began her 2-year appointment this fall with the National Institute of Health in Allergy and Infectious Diseases, in the radiation and nuclear countermeasures program developing mitigation strategies in the event of a nuclear crisis.

Perez-Horta suggests current graduate students take advantage of professional development and career exploration. In addition to competencies like analytical thinking and problems solving gained through graduate education, transferable skills and learning from people in the field will help develop a competitive résumé for a career outside their academic training.

“In my case I really wanted to go into public service and apply for something that would have an impact on society. It is something that is attainable, and may be a little uncomfortable to think outside the box, or to deviate from the path, but it shouldn’t be portrayed as an alternative career, rather, a career that’s equally valuable in which you’re able to succeed.”