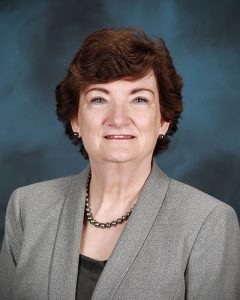 Michelle Buchanan has built her career on a breadth of knowledge and strong communication skills, both gained in part through experiences as a graduate student at UW–Madison.

Buchanan earned a PhD in chemistry in 1978. While in graduate school, she loved being immersed in scientific problem-solving and working with other students.

As a student, Buchanan took a wide range of courses to learn more about topics that supplemented her research. Though she was in analytical chemistry, she worked with colleagues studying nuclear magnetic resonance and eventually wrote her thesis on the topic.

“Getting some breadth in your background while you’re in graduate school in addition to depth, which is what graduate school typically gives you, served me well,” she said.

She started her first job at the Oak Ridge National Laboratory (ORNL) in 1978, where she and her husband – who had defended his dissertation on the same day Buchanan defended hers – were both able to pursue research.

Since then, Buchanan has authored or co-authored more than 150 scientific publications and reports, edited a book, and secured two patents. She has been a member of advisory board memberships with research universities and major research centers and served on editorial boards of five different scientific journals.

At ORNL, Buchanan gained experience with multiple departments in the lab. Over time she has directed or associate directed organizations in organic and biological mass spectrometry, chemical sciences, life sciences, physical sciences, and the Center for Structural Molecular Biology. She said that experience opened the door for her to take on a leadership role at ORNL.

“Having that breadth, you get asked to lead people,” she said.

As the Deputy Director for Science and Technology at ORNL, Buchanan now guides the laboratory’s strategic directions. In her leadership role, she also emphasizes mentoring staff members early in their careers.

One skill Buchanan said was vital to her professional success is communication. ORNL’s funding comes from proposals that Buchanan and her colleagues write to federal agencies, making writing skills extremely important.

“You can be the best scientist in the world and if you can’t communicate orally or in writing you’re not going to be successful,” she said.

She said she’ll always be grateful that her graduate school advisor would ask students to rehearse their talks before giving them. She and her colleagues would practice in lecture halls until they knew how to present their talk.

With her broad expertise on energy sciences, Buchanan has consulted for various federal agencies such as the Department of Energy and the National Science Foundation, which she finds fun to do.

“I never thought in graduate school that I would have an impact on the direction of science in the nation,” she said.

Despite the stresses that can come along with graduate school, Buchanan said it’s important for graduate students to take some time to explore new topics and to build networks with their colleagues.

She encouraged current students to take advantage of the collaborative environment at UW–Madison.

“Take the time to enjoy the process of getting to know colleagues who will help you as you’re going through your career,” she said. “It’s going to be valuable for the rest of your career.”