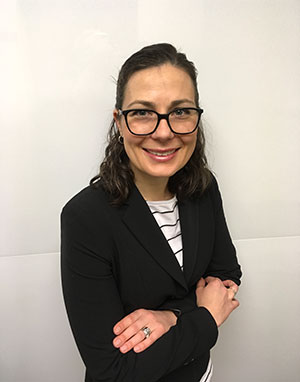 Katherine Paulsen earned a PhD in chemistry in 2013. She studied heme-containing proteins in Judith Burstyn’s research group. Immediately after graduating, she began working for Thermo Fisher Scientific, a Madison-based company that designs and manufactures scientific instruments. Her first job at Thermo Fisher was as an applications scientist on the commercial sales team, after which she worked in technical support. Paulsen now works as a product manager for FTIR (Fourier Transform Infrared) spectrometers and accessories.

How did you get into this career after completing your PhD?

It was actually pretty serendipitous. One of Judith Burstyn’s former students actually works here at Thermo in Madison. Jeff and I never overlapped due to the gap in our times in graduate school but Judith had told me about him, so I knew a little bit about him and set up an informational interview to find out what he was doing. It really was my connection and network and serendipity.

What kinds of things did you do as a student that you believe made you competitive as a job candidate?

I knew fairly early on in my grad school career that I wanted a “non-traditional” job – not to be a research scientist and not to be a professor. As I got closer to thinking about graduating, I really tried to do informational interviews and networking through different groups. I really took it upon myself to set up informational interviews with people in industry so I could get a feel for what it is like to work in industry. Also, I think taking the initiative really helped secure my job at Thermo.

What advice do you have for students who want to conduct informational interviews?

People will generally be willing to share a little bit of their time and talk about their career trajectories and how things have unfolded, so just ask. But, I would also caution not to do it too close to finishing grad school, because then there could be the misconception that one is asking for a job. Really, what you’re looking for is mentorship, and most people are willing to be mentors and talk about themselves for half an hour.

What do you like about being a project manager? What is challenging?

What I like and what’s challenging are one in the same. It’s a really fast-paced role and you’re being bombarded with a lot of information. You have to make decisions constantly but also very quickly. You have to have an ability to deal with a little bit of the chaos that’s going on, and also think long-term and big picture.

What skills from graduate school are the most useful to you in this job?

Industry is faster-paced than grad school is. But in both industry and grad school, there’s the chaos of the right now but also keeping an eye on the bigger picture and making decisions that help move you forward. In industry, it’s always moving your product forward and trying to find advancements when you can. Grad school is similar in that regard too. You’re trying to make progress, and the end goal is the dissertation, finishing.

What career advice do you have for current graduate students?

Take a shot. Take a chance. You’re not necessarily going to be told no – you have to ask. No one knows what it is you want to do, so it’s on you to pursue it and it’s on you to take chances on yourself. If you’re not willing to take a chance on yourself, why would anyone else? It’s a lot of personal marketing of yourself coming down to the end.