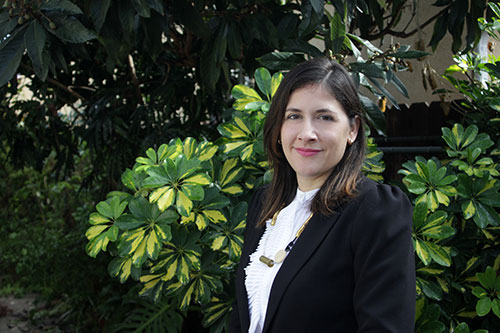 Marcela Guerrero is Assistant Curator at the Whitney Museum of American Art in New York. From 2014 to 2017 she worked as Curatorial Fellow at the Hammer Museum in Los Angeles. Prior to her position at the Hammer, she worked in the Latin American and Latino Art Curatorial department at the Museum of Fine Arts, Houston (MFAH) where she served as Research Coordinator for the International Center for the Arts of the Americas (ICAA). Guerrero’s writing has appeared in a variety of publications including ArtNexus, Diálogo, Interventions: International Journal of Postcolonial Studies, Caribbean Intransit, and Gulf Coast, and she has contributed articles to a variety of exhibition catalogues. Born and raised in Puerto Rico, Guerrero received her bachelor’s degree from the University of Puerto Rico, Rio Piedras Campus, and holds a PhD in Art History from the University of Wisconsin–Madison.

Tell us about your path from graduate school to your current position.

I left Wisconsin in 2010 after defending my dissertation proposal. At that point in my life I was committed on finishing the dissertation but I was yearning for practical experience that could get me closer to a career in museums. When I left Wisconsin, it was to start a job at the Museum of Fine Arts, Houston (MFAH), where I worked as Research Coordinator at the International Center for the Arts of the Americas, which is the research arm of the Latin American art department at the MFAH. That was the perfect job for me because it was like having a foot in the world of research and the other foot in a curatorial department so it felt like a transition from grad school to my first real, full time, adult job. I was there for three years and after that I took a job as Curatorial Fellow at the Hammer Museum in Los Angeles. There I assisted on the exhibition Radical Women: Latin American Art, 1960-1985, curated by Cecilia Fajardo-Hill and Andrea Giunta. The exhibition was part of the Getty Foundation’s initiative called Pacific Standard Time: LA/LA, which sought to highlight Latin American and Latinx art in Los Angeles and other parts of Southern California. The experience of working on Radical Women and writing for the catalogue was life changing. Unfortunately, my job there was temporary; at the end of the exhibition I was going to be without a job. A couple of months before the opening of the exhibition, I applied for the assistant curator job at the Whitney and, after several rounds of interviews, I was offered my dream job.

What do you do in your current role?

In my role as assistant curator at the Whitney Museum I get to organize exhibitions and bring works into the permanent collection. As an assistant curator, I do not work directly with a senior curator the way curatorial assistants do. I have a great deal of autonomy but that also means that I have other responsibilities such as being part of the Emerging Artists Working Group, the Indigenous Artists Working Group, the Equity & Inclusion Committee, and I co-lead a bilingual initiative at the museum.

What is challenging about this job?

I like 99% of everything that comes with my job. One challenging aspect of my job is that I can’t do everything at once and that means that many deserving artists cannot have their retrospective exhibitions at this minute or we can’t acquire their works immediately. I have to remind myself that my career is a marathon, not a sprint.

What skills from graduate school are the most useful to you in your role as assistant curator?

I take pride in my research skills. I know how to study an issue, how to inform myself of the recent scholarship on a topic, and where to go to find different sources, from dissertations to peer-reviewed articles and from anthologies to online blogs or YouTube interviews. Also, I always insist that I learned critical thinking skills from my advisor, Jill Casid. Knowing how to think critically and how to question an issue from different angles is a tool that is useful not only in academic or scholarly pursuits but in daily conversations with friends and colleagues.

What kinds of things did you do as a student that made you competitive as a job candidate?

Every summer during my graduate work I was doing what I call “resumé builders.” I did several paid summer internships, I did an intensive Portuguese language course (funded through a FLAS scholarship), and I participated in different programs (like the Smithsonian’s Latino Museum Studies Program). All the teaching I did as a TA in the Spanish & Portuguese department also gave me an advantage in terms of language skills, which have proved to be useful in all the jobs I’ve had since grad school.

What advice do you have for current graduate students interested in this type of career?

I would advise graduate students to think broadly; a career in museums doesn’t only have to be in a curatorial role. There are plenty of other jobs for which a degree in art history is desired. For instance, registrars, librarians, and people who work in fundraising must have a broad understanding of art history. This will make you more desirable as a candidate when applying for a job at, say, the Metropolitan Museum of Art, which has an encyclopedic collection, or at the Whitney, a museum dedicated to 20th and 21th-century art. In either case, a degree in art history will give a leg up over someone coming with a degree in business alone, for example, who won’t be able to apply that knowledge to the context of the museum or the audience that it serves. In the specific case of curatorial, you must seek practical experience to round out your academic experience.