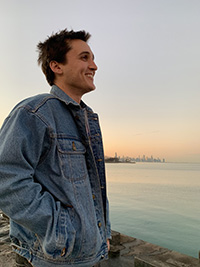 Alexander Cole is pursuing a PhD in physics, performing research at the intersection of string theory, cosmology, and data science. He received a Straka Fellowship from the Graduate School for the 2019-20 year which enabled him to spend spring 2020 at the Kavli Institute for Theoretical Physics as a graduate fellow.

Cole is interested in connecting string theory to our universe. One reason this proves challenging is that string theory appears to admit a vast and intricate landscape of solutions as candidate “universes.” Understanding data sets of this size and complexity is where data science comes in. One of Cole’s focuses is persistent homology, a technique that computes the shape of data via its topology.

In addition to using persistent homology to map out the structure of the string landscape, Cole has introduced the technique to cosmology, using it to study the Cosmic Microwave Background. “By studying the oldest light that reaches us, we hope to reconstruct the very early universe,” Cole says. “The universe was very energetic back then, so it’s a good place to look for new physics.” Cole is also studying the topology of the “cosmic web” of large-scale structure and the topological signatures of phase transitions in condensed matter systems.

“A lot of physics can be approached from the perspective of looking for patterns,” Cole says. “Once we’ve identified relevant patterns, we can begin to describe systems whether they are laboratory-sized or cosmic in scale.”