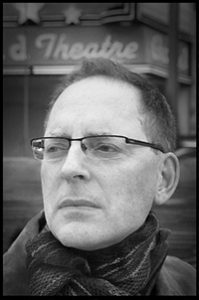 Steffen Silvis is a PhD student in Interdisciplinary Theatre Studies studying the role that Japanese Noh theatre played in the development of American modernist drama and dance. Although the influence of Noh can be seen throughout various works and individual artists, Steffen said no major study has been done on this topic so far.

“I have taken as my task a definitive study of how Noh was taken up by early 20th century American Modernist poets and playwrights and how that work has been fully absorbed into American theatrical and dramatic practices,” he said.

Steffen is also a playwright, actor, and producer who has previously worked as a theatre critic and freelance writer covering theatre arts in the U.S., London, and Prague. Steffen received a Chancellor’s Fellowship, which brought him to UW–Madison to pursue his master’s degree. As a PhD student, Steffen has served as a teaching assistant and a lecturer, receiving a TA Excellence Award from the Integrated Liberal Studies Program and an Honored Instructor of the Year award from UW–Madison. Most recently, Steffen has received a Mellon-Wisconsin fellowship to support work on his dissertation.