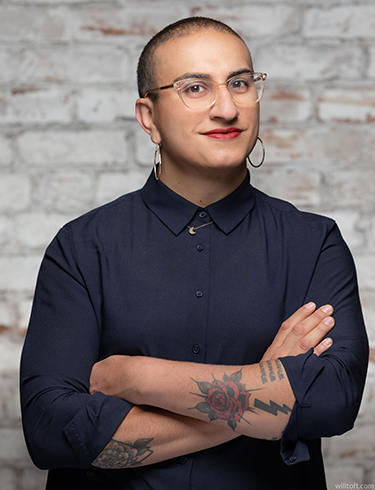 Alex Hanna earned her PhD in Sociology in 2016. Her dissertation focused on the Machine-learning Protest Event Data System (MPEDS), which she developed to identify and code information about protests. After graduating, Hanna became an assistant professor at the University of Toronto Mississauga in the Institute of Communication, Culture, Information and Technology. Two years later, she joined Google as a technical curriculum developer, drawing on experience from graduate school developing curriculum for and teaching data science workshops.

Hanna is now a senior research scientist on Google’s Ethical AI Team, which focuses on responsible artificial intelligence (AI) and decision-making systems. There, she works to better understand data and its origins, as well as the history of fairness within machine learning systems. This year, the Women in AI Ethics project named Hanna to its list of 100 Brilliant Women in AI Ethics for 2021. Hanna talked with us about her work, the skills from graduate school that are useful, and the transition from academia to industry.

A sociological perspective on data and technology

Hanna’s sociology training lends a key perspective to the Ethical AI Team. She is grateful to the UW–Madison Sociology Department for helping her develop a sociological imagination and a grasp of what social research is like. It orients her to look at a data set or piece of technology and see the broader patterns behind it.

“Data sets are things that often come to computer scientists or AI practitioners neatly packaged in a downloadable file, but there have been so many decisions and choices that have gone into this data set and its creation,” Hanna said. “As a sociologist, I’m thinking this thing had to be a product of hundreds if not thousands of decisions that have been made in labs and people’s living rooms. This stuff is being annotated in the most mundane places, and it’s not like this comes from on high. There’s a lot of decisions that go into it, and those decisions are at the nexus of social structures, be that institutions and national policy, funding and what the researchers’ interests are, or what the university’s interests are and what the national interest may be.”

In ethical AI work, it’s important to remember that data itself is not unbiased.

“Knowing that it’s trained on past data, there’s a very strong chance that those data are exacerbating existing race, gender, and class inequalities,” Hanna said.

Hanna’s day-to-day work includes research on data, how practitioners use data, and how to mitigate inequality that arises from existing data sets. It’s not that much different from the research work she did as a social sciences graduate student, she said.

As a social scientist at a technology company, Hanna said that she enjoys how her work puts her in contact with people with different roles and perspectives. That makes the ability to translate ideas from academic conversations into practice critical.

“The intent here is not only thinking about how to do research but making it applicable to AI product and AI policy,” Hanna said.

However, approaching problems from a sociologist’s perspective can also result in pushback, Hanna said.

“A place like Google is a place where people solve a lot of problems while writing code or collecting data. Sometimes that’s what the solutions look like,” she said.

Other times, Hanna’s job is to push back and remind colleagues that the solutions need to be broader and encompass the ways that social structures are influencing a technology or engineering problem.

“Working through that resistance is one of the rewarding parts of the job, too,” she added.

The change from academia to industry

Hanna said it was a hard decision for her to make the jump from academia to industry.

“One of the things I think was hard for me was to change who I thought of myself as, what kind of a researcher or what kind of an intellectual laborer I was seeing myself as, and allowing that to be expansive to encompass being in an industry position,” Hanna said. “Now that I’m in an industry position, I am finding it to be a place where I am doing really well and thriving. And it’s because there are things in industry that are really appreciated that are sort of underappreciated when you’re in a purely academic setting.”

First, Hanna said translating an idea from something specific and disciplinary to something broader for a non-specialist audience is an important skill. In Hanna’s case, it often means translating sociological concepts into terms that engineers can use.

Second, collaborative work is necessary – especially to bring different types of knowledge to a project. “None of the papers that I write now are without a coauthor,” Hanna said.

Third, project management is a key skill for working on multiple, collaborative projects. Hanna said that graduate school often helps students develop these skills, either through their training or direct experience managing a project. One of her projects in graduate school with her advisor Pamela Oliver and sociologist Chaeyoon Lim had a group of almost 20 people working on a grant. “That’s actually made me pretty good at managing all of these collaborative projects at Google as a researcher,” Hanna said.

For those who want to find a job in industry, Hanna said it is helpful for students to promote themselves as people with excellent project management and execution skills.

“Managing your research project just takes an immense amount of work – anywhere from gathering data and writing the data up and doing the data analysis,” she said. “If you’re doing that all on your own, that’s a huge coordination effort.”

Hanna encourages students to find ways to present what they have achieved in graduate school in terms that industry employers will recognize more readily. For example, collecting data for research looks a lot like data practices in industry. Or, students can highlight their public speaking experience, which many people in industry don’t have.

“These are things that employers want and I think illustrating that you can translate that between academia and industry is super important,” Hanna said.

Finally, students can also reach out to people from their disciplines to learn more about what jobs they’ve found and which skills translate into that role.

Hanna said she and her colleagues often hear from students asking what it would be like to shift from academia into industry. “It is an acceptable career path,” she said. “Not everyone has to be an academic or professor.”