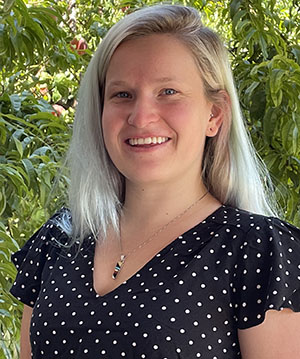 Katie Deaven is a PhD student in Philosophy studying philosophy of biology. She is from Los Alamos, New Mexico, and attended New Mexico State University where she was named an Arts and Sciences Outstanding Undergraduate.

Katie studies the concept of evolvability, which refers to a set of features that influence a population’s evolutionary outcome. These features explain why a population evolved the way it did by providing information about the evolutionary pathways that were available to the population at a given time, Katie said.

Both scientists and philosophers have contributed to the study of evolvability, and Katie hopes that her dissertation work will push the conversation further into a new direction. She focuses on three main questions: What is the nature of evolvability? Are the factors that make up evolvability distinct from other evolutionary factors, such as selection? How can we test for evolvability and compare evolvability between two populations?

“Although the concept of evolvability has been invoked since the 1930s, evolutionary biologists have only recently begun reckoning with its explanatory importance and the integral role it may have in resolving foundational issues in the field,” Katie said. “The relationship between evolvability and selection is far from clear, which shows why a clear account of evolvability matters and how these questions relate to some of evolutionary biology’s fundamental assumptions and controversies.”

Katie received a Graduate School Fellowship from spring to summer of 2021. She said the support highly impacted her research and dissertation progress, and she is proud of what she accomplished during her fellowship.

“This was the first summer during my graduate career where I did not have to work and could wake up every day knowing the only thing on my plate was writing,” Katie said. “I took advantage of that time and was able to make a lot of progress even during a pandemic.”