Fifteen graduate students at the University of Wisconsin–Madison have been honored as recipients of the 2017 Campus-Wide Teaching Assistant (TA) Awards.

To recognize the excellence of TAs across campus, the Graduate School supports the College of Letters & Science to administer awards each year for exceptional teaching by graduate students. UW–Madison employs more than 2,000 TAs across a wide range of disciplines. Their contributions to the classroom, lab, and field are essential to the university’s educational mission.

The Graduate School congratulates the following winners of the 2017 Campus-Wide TA Awards:

Honorees received their awards and celebrated with family and friends in a reception February 20. Read below for more about the 2017 award winners. 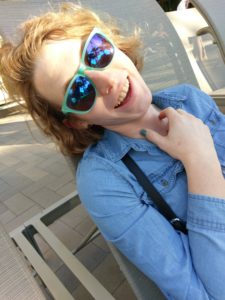 Juliette is a fourth-year PhD student in Mathematics. She has taught classes in algebra, statistics and probability, and calculus. Additionally, she has held a non-standard teaching assistant position with the Madison Math Circle, an outreach program sponsored by the math department, since spring 2016.

“One aspect of teaching for the Madison Math Circle that I really enjoy is taking the University of Wisconsin–Madison beyond the bounds of campus, making our learning community open and inclusive to as many people as possible,” Juliette said. 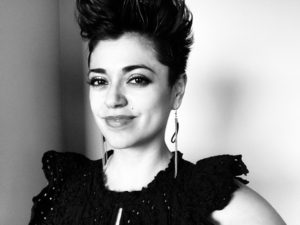 Laura is a fourth-year PhD student in Counseling Psychology. She has taught multiple courses over the past four years including academic enhancement seminars, a Posse seminar, theory and practice in interviewing, social and cultural foundations in counseling, and abnormal behavior and psychopathology.

In teaching, Laura said she enjoys having the opportunity to create an environment that empowers students in both their learning and their identities.

“I love influencing students to feel confident in themselves and finding more doors to walk through when one closes on them,” she said. “In the end, I want my students to walk away from my courses feeling like their dreams are valid and that college indeed is for them no matter how many setbacks they might have or may continue to encounter along the way.” 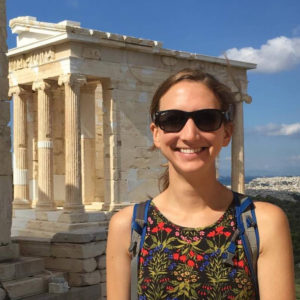 Molly Harris is a dissertator in the Department of Classical and Ancient Near Eastern Studies (CANES), specializing in Classics. She has taught various classes for the department, including Greek civilization, religions of the ancient Mediterranean, and classical mythology. In addition, she has taught Latin and integrated liberal studies classes.

“I enjoy helping students understand and embrace the learning process, whether they are developing an idea into a paper through research or applying their knowledge of grammar and vocabulary as they translate a Latin poem,” Molly said. “I love sharing the history and culture of the ancient Greeks and Romans with my students and exploring the meaning that classical literature still carries today.” 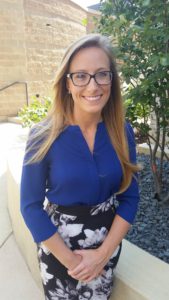 Brianna is a fifth-year PhD student in Spanish with the Department of Spanish & Portuguese. Her research focuses on pronunciation variation of consonants across the Spanish-speaking world to shed light on processes of language change through time.

With the Department of Spanish & Portuguese, Brianna has taught first through fourth semester Spanish, as well as intermediate and advanced language practice classes. Additionally, she has taught adult continuing education Spanish classes at Madison College and will be the faculty lead for the Center for International Education French Immersion in Quebec in Summer 2018.

“My teaching has consistently placed focus on student discovery and integration of various methods that promote development of language skills in reading, writing, listening and speaking,” Brianna said. “Students play an integral role in their own learning by discerning how the language operates, so that studying grammar becomes a process of shared discovery rather than a lecture topic.” 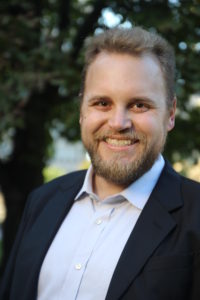 Chris is in his third and final year pursuing a doctorate in Music: Performance. In addition to serving as the instructor of record for the Women’s Choir and University Chorus courses this year, Chris has also taught across a variety of disciplines, including mathematics, political science, and integrated liberal studies.

“I enjoy helping students connect their passions to the material with which we are working, whether argument or musical moments,” Chris said.

David is a PhD candidate in Philosophy, working in moral and political philosophy. In his dissertation, he defends the claim that certain inequalities are, in themselves, bad. He has been a TA in courses including elementary logic, contemporary moral issues, and introductory ethics, as well as a lecturer in introductory ethics, contemporary moral issues, and reason in communication.

In his teaching, David said he works to emphasize the ways in which philosophical analysis is an important and collaborative activity.

“After I equip my students with a toolkit of techniques for formulating and evaluating arguments, my students and I then help each other to apply these techniques to a variety of vexing theoretical and practical problems,” he said. “My favorite part of teaching is seeing students become engaged and excited by our attempts to solve difficult problems together.” 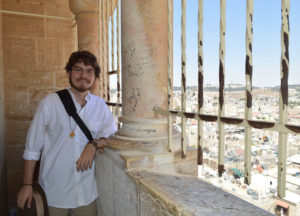 Geoffrey is a fifth-year PhD student in Anthropology, specializing in archaeology in the ancient Near East. He has taught classes in anthropology, Latin, and Classics. His teaching philosophy is best summarized in a plaque on Bascom Hall on campus: “We believe that the great state University of Wisconsin should ever encourage the continual and fearless sifting and winnowing by which alone the truth can be found.”

“The goal of higher education is not to train students to mindlessly regurgitate academic dogma, but rather to teach them to ‘sift and winnow’ through the chaff to find the truth in whatever discipline or situation they find themselves in,” Geoffrey said. “I see my role as an educator as one of equipping and guiding my students to seek and ultimately to find the truth for themselves. Even if this process begins with unglamorous memorization of dates and vocabulary, the end towards which it is directed is gleaning a deeper understanding of truth – and that is a goal worth dedicating my life to.” 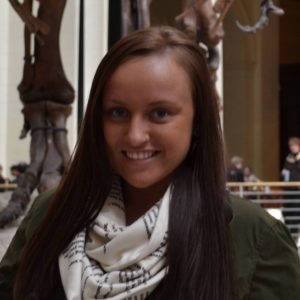 Lacey is a sixth-year PhD student in Nursing. She has taught courses in nursing since fall 2012, including on mental health, healthcare systems, legal and social forces in nursing, and professionalism. Additionally, she has been a discussion leader and lecturer for a gender and women’s studies class, “Women and their Bodies in Health and Disease.”

“I decided to pursue a PhD in Nursing because I believed that conducting health disparities research from a nursing perspective would grant me the opportunity to be a career activist for the vulnerable populations that I serve as a nurse,” Lacey said. “Now that I am near the end of my PhD program, I feel equally excited about education because it gives me the privilege of teaching students how to advocate for their individual health and for the health of their future patients.” 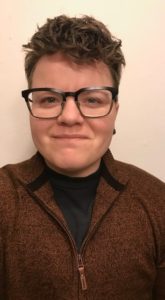 Caelyn is a third-year PhD student in Communication Arts, specializing in rhetoric politics and culture. Their work focuses on disability, race, and criminalization.

They have taught classes in Communication Arts since fall 2015, including introduction to speech composition, theory and practice of argumentation, African American rhetoric, and rhetoric and technology.

“My goal is always to create an accessible learning space that invites my students to bring their whole selves to class so that when they leave, they think more critically about how they move through the world,” Caelyn said. 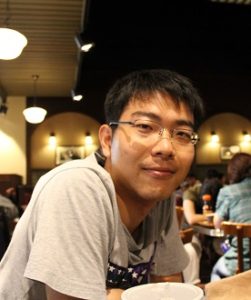 Chao is a third-year PhD student in Industrial Engineering. His research focuses on statistical modeling, monitoring, and diagnosis of smart, connected systems. He has been a TA for an Industrial and Systems Engineering class on computer integrated manufacturing.

“I enjoy guiding students to be curious about knowledge that extends beyond the course, helping them apply knowledge and theory to real-world applications,” Chao said. 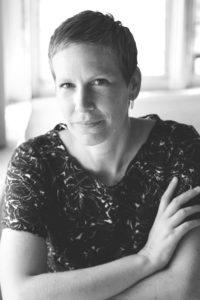 Erica is a third-year MFA student in Human Ecology, specializing in Design Studies. She has taught classes in textile design, including printing and dyeing, and manual and computer-generated imagery.

The opportunity to expand students’ frame of reference for themselves and the world is one of the many things Erica said she enjoys about teaching.

“In our current times, we need to expand on our ways of connection and collaboration by offering more opportunity for understanding across cultures,” she said. “Students often perceive that the focus in their learning is on producing an artifact or object rather than developing critical understandings about practice through design. I love working with students to master technical skills while thinking critically about their role and responsibility in society as designers.” 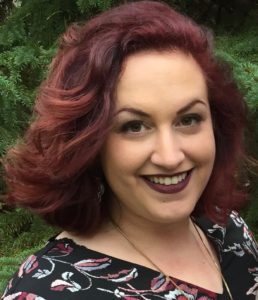 Sarah is in her second year in the Sociology program, with a specialization in Sexuality and Gender. She has taught Survey of Sociology for four semesters as well as a class on sex and gender.

To Sarah, learning is a process that extends far beyond the classroom.

“I always want to encourage students to take their education into their daily lives as activists, job occupants, and friends and family members – but also to engage in thoughtful discourse with others in the academy,” she said. “I believe student-driven teaching is essential at the university level and I push myself each year to develop my own skills as an instructor. Every week, I look forward to coffee-fueled conferences and the chalkboard stains on my slacks.” 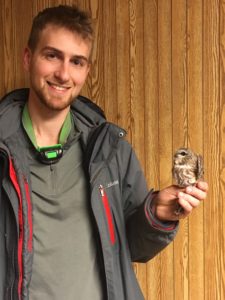 Jeremy is a fourth-year PhD candidate in Zoology, within the Department of Integrative Biology, conducting research on the neural mechanisms by which limited environmental resources fine-tune the timing of breeding in birds. He grew up in San Jose, California, and received a bachelor of science from UC Berkeley in 2013.

Jeremy taught introductory biology lab during the 2016-2017 academic year, neurobiology in the fall of 2017, and is currently pursuing a Delta Certificate in Teaching and Learning. He strongly believes that making active efforts to develop classroom communities can increase student motivation and foster love of learning. 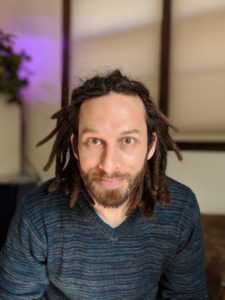 Kenny is a PhD candidate Business, focusing in risk and insurance in the Wisconsin School of Business. His research interests include insurance regulation and insurance company operations. His dissertation focuses on constructing a measure of diversification in the insurance industry.

In the classroom, Kenny employs his background in physics and math to help students connect abstract ideas in statistics and economics to concepts for which they have already developed an intuition. He has taught courses in business statistics, business analytics, and introductory risk management. 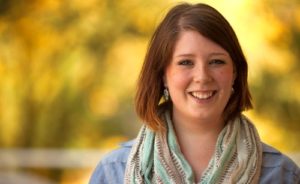 Marissa is a fifth-year PhD candidate in Communication Arts specializing in rhetoric, politics, and culture. Her research focuses on discourses of national security, counterterrorism, race, and immigration in U.S. law, politics, media, and culture in the 20th century. She has taught classes in communications arts with topics including public speaking, theory, and practice of argumentation and debate, communication and human behavior, and great speakers and speeches.

“Teachers of rhetoric have long centered the role of communication education in outfitting students for enthusiastic, rigorous, and virtuous participation in society and culture,” Marissa said. “In the spirit of this tradition, I seek to use innovative techniques and course design in teaching so that I can transform the classroom into a space of collaborative practice and curious experimentation, a sort of ‘lab for democratic participation.’ My goal is for students to see themselves as members of a society with voices worth using and the potential to make lasting, meaningful change.”