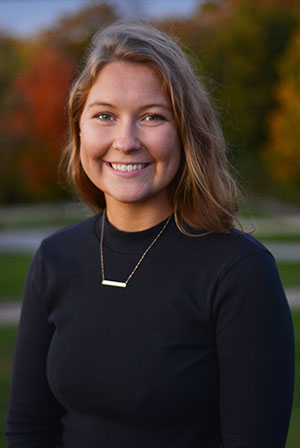 Sally Rohrer is a graduate student at the La Follette School of Public Affairs studying tax and economic policy. In early November, Rohrer was appointed to an open seat on Madison’s City Council as alder for District 8, which includes much of the UW–Madison campus. Rohrer will serve until the April election. On campus, Rohrer is also a project assistant for Associated Students of Madison (ASM), the student government organization. She previously studied political science and economics as an undergraduate at UW–Madison and in Copenhagen, Denmark.

What brought you to study at the La Follette School of Public Affairs?

My interest in economic policy started when I was studying in Copenhagen. I took classes on the welfare state and the social safety nets that they have there, and realized that there were a lot of things other countries are doing to make people better off that we weren’t necessarily doing in the United States. One of the reasons I pursued a master’s in public policy was because I was interested in seeing how those policies could translate to a different setting and looking into the social safety nets we have here and how we can improve them.

How is your role as alder connected to what you’re studying?

It’s a direct application of everything I’ve been learning, especially because we just passed the budget Nov. 13 for the city. Last year I took a class on state and local government finance. We looked at things like revenue streams, property taxes, and how cities budget. Then, I was able to directly apply that. It was cool to see everything you learned in class actually happening right in front of you. Also, being a part of it so intimately was really cool.

I think that because I only had a couple of weeks to figure out what was going on and get context before we voted on the budget, it was really helpful to have that background and to know the revenue streams that cities in Wisconsin are using and all those little, tiny things. I didn’t have to research them. I already knew them from La Follette.

What has it been like going through that process of becoming alder and jumping into the city budget approval process pretty much right away?

It felt like I was cramming for a huge exam for three weeks. We think we’re kind of a small city but there’s still a ton of money that we spend on all these services. So parceling through all of that, figuring out what potential was left in the budget, was really interesting. I think it’s really reshaped the way I see the city. When I see a city bus now, I think of it as part of our Metro budget. It’s really changed the way I see the system and the functioning of our city government, and it’s really miraculous that everything comes together and works for us every day. It’s been really, really challenging and interesting and has really been formative.

Why did you decide you wanted to go to grad school?

Economics as a major is really theoretical and market-based, and I felt like I had like an interest in seeing how those things actually function in the real world. The great thing about a public policy degree is it’s the intersection of politics and economics in that every policy decision is based on some understanding of economic markets. So, to me, it was an application of an economics degree and a way to make real what I had learned.

With everything you’re involved in – Associated Students of Madison, the Madison City Council, being a grad student, and everything else – how do you manage your time?

There’s a lot of flexibility in grad school that there isn’t necessarily an undergrad – my courses aren’t necessarily meeting as frequently – and that gives me a lot of flexibility to rearrange my schedule in ways that are really efficient. Because City Council has taken up a lot of my time in the past couple of weeks, people have been really flexible with me trying to work around my schedule, which has been helpful.

What are your career goals after graduate school?

Right after graduation, I want to work in either voting rights on a presidential campaign in Wisconsin, just because we know the 2020 election in Wisconsin is going to be so pivotal. And I’ve worked in voting rights in the past. It’s really important to me that everyone has access to the ballot and we have equitable systems for people to vote. So that’s what I want to do right after graduation, and then after that just continuing in whatever way possible to serve and, through policy, make people better off.

What advice do you have for other students who want to get involved in civic service?

Finding people who are doing things that interest you and then just connecting with them is really important. I feel like my time as a student at UW has been defined more by what I’m doing outside of the classroom and the application of what I’m learning. It was always important to me to find people who are doing things that inspired me and helping them, figuring out how they got there, and then following in their footsteps if it’s something that interests you.